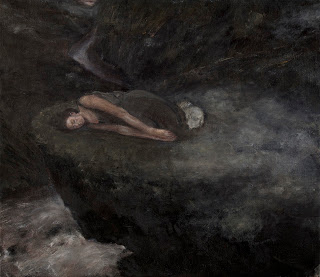 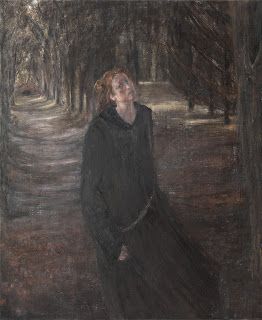 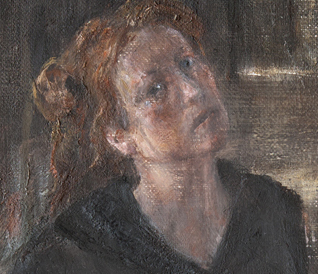 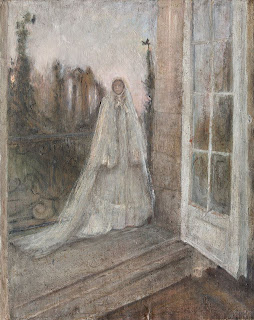 The smell of fall

We are flying down across Europe in a fast and nice car.
Everytime I drive a car at dusk, I see my childhood valley. I am driving towards grey skies, where dark clouds lay both high and low. There are the steep mountains in the west. There is the mountain side by the water at home where the water is great and deep, and in between the mountain side and the water, a road is creeping. It is this road I am driving now. Soon I see lights on the right. I know that I am driving in the middle of Europe, and that the lights belong to a German village, but I see my childhood village. The cluster of lights up to the right are Oppigarden, the farm further up. Then, further down, there is the farm I am from, with a small gap between house and barn. There are bushes of berries, I know. Imagine, I am this close to home. Inside of the houses, grandfather and grandmother are sitting with their supper. My grandfather then goes into the livingroom, sitting down to play the fiddle.
I can smell the scent of apples. I hear the jingling of milk buckets. The animals are nagging contently from the barn. Then we pass Göttingen. The childhood disappears. We pass Köln, and after a few hours we are in France. It is pitch dark. I see glimpses of the neighbouring village, hearing the dogs barking as I pass one night time. It smells of fall.
In Lutheran countries, a nice day must be paid for with a bad day. If you are rich in houses or money, few will shed tears if you get cancer.
If your child has a birth mark across half the face, you have already paid for your future good days.
In the folk tune Herr Peder, the main character understands that he must be sacrificed to ensure the survival of the rest of the crew. The storm is raging at sea. The bottle is pointing to Mister Peder, who acknowledges his fate. Mister Peder jumps over board, and the sea ceases abruptly. Lutheran countries are like that. People who live there may well imagine themselves free of religious bonds. But the forms survive.
The country is formed by Lutheranism.

Then I get an idea...
We have to sacrifice our home.
We have to sacrifice what we have built up together.
We have to sacrifice the farm, so beautifully situated by the sea.
Everytime we return there, after stays abroad, we sit on the veranda gazing and breathing the smell of sea. The wind chases the clouds away, and we inhale the feeling of home. The landscape we gaze upon is not of our time, but an eternal view with open sea.
Our children run down to swim. They go out to the furthest point, where the water is cold and fresh. This is what we are to sacrifice. We are to sell the childhood dream of our children. The place where we once in the future would receive our grandchildren. The place where we each summer (and winter) received American students, who finally enjoy some rest from paperwork and everyday life.
Then perhaps the next court will be more humane and fair if we make this sacrifice, get out of the country and sell our home.
If there ever is a new case. Only 20% of those sentenced in this category are allowed to appeal.
We did not know this.
We did not know that the chance of appeal was that small.
Did you?
The native country is too small.
My granparents are dead . Everything has its time, and the little farm by the sea shall pass over into new hands.
New children shall rejoice in building sand castles on the little beach, wading over to a small island where the oyster catcher nests every year and chases anyone who gets near.
Or they may wander to the farthest tip of the rocks, as our children have done, where the waves are a little large and a little dangerous.
New people shall sit in the glass veranda and enjoy the view, regardless of winter, spring, summer or the smell of fall.

If you are not allowed to move, and change address to another European country, then surely one must be called a refugee...
Society has ostracized one of its citizens.
The first refugee is strong, and often forms a sect.
The lonely citizen has a sect to offer future refugees. It is nice to be accepted,
and to feel welcome.
At times, society goes to war against the outcasts. Not because the sect is dangerous, but because the people look different and act differently.
They deviate from the norm. Of course! They are expelled from the norm.
The attack from society is a problem of racism. Racism is conducted with blessings from the state. But the act is not called racism before it has been going on for a while.
The term racism is only used in retrospect...
In the verdict concerning my husband, 17th August 2011, it is written that ”he sold the house in Iceland”.
That same verdict does not mention that this house was sold in 2007, many years after the years in question.
How can you trust the Norwegian court, when a person is assessed politically?
A person that has never been involved in politics, that has never been a member of any political party, is still sentenced on political grounds.
What in my husband makes a court invent accounts and question house sales?
Selling a house is allowed for others, but not for the family Nerdrum-Spildo.
But it may also happen that a person is left in peace...
Then we must be in a bigger country, with a bigger culture and a self-esteem based on this culture.
Upright people do not mob.
The native country is too small. What a pity.
Or... perhaps not?

The wandering jew was and is a bright human being.
We drive on towards Paris, after a few hours´ sleep in Lille. The road leads us to the city center, either we want it or not. We try avoiding the circle around the Arch of Triumph, going back and forth through small streets.
Two persons with ringlets along their faces and large, black hats on their heads are standing on a corner. The young men meet us with kindness and show us the way.
They both point in the same direction and explain.
Then they enter the synagogue together.
The hours fly when you are looking for home. Twilight is falling already, but at least we are approaching!
I can see my grandmother in the window. She has seen us, and is waving.


Odd Nerdrum”:
”When the stranger knocks: The stupid one chases him away.
The impudent asks him to do the dishes.
But the smart one invites him in for supper, to hear news about the world.” 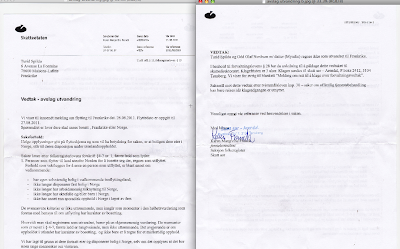